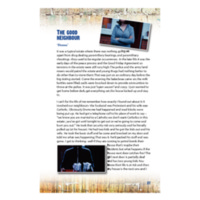 One of 16 personal accounts that were published in the book: 'Up Standing: Stories of courage from Northern Ireland'. (2013)

"In this story, Donna describes protecting a neighbour’s house from being petrol bombed by guarding it with a fire extinguisher. The story is set around 1997-98 when the Drumcree parading dispute was at its peak and there was widespread violence across Northern Ireland." (Up Standing: Educators Guide, p.20)

The Corrymeela Community in partnership with Facing History and Ourselves.. (2013). The Good Neighbour, by 'Donna' (story text). The Corrymeela Press.
Accounts of the Conflict; Accessed: 3 December 2022 <http://accounts.ulster.ac.uk/repo24/items/show/2502>

Up Standing: Stories of courage from Northern Ireland (book details)