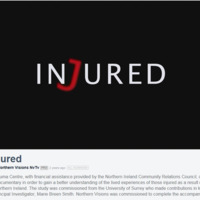 A film made by Northern Visions to accompany a study of the lived experiences of the those injured as a result of the Troubles in Northern Ireland. The film was commissioned by WAVE Trauma Centre with financial assistance provided by the Northern Ireland Community Relations Council. The research study was commissioned from the University of Surrey who made contributions in kind of the time of the Principal Investigator, Marie Breen Smith.
The film is comprised of extracts from interviews with 47 people.

Injured ... on that day (book details)