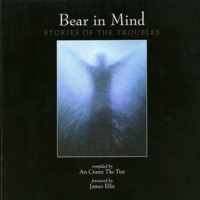 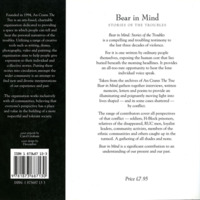 Collection: Bear in Mind: Stories of the Troubles (collection)
Organisation: An Crann / The Tree (organisation)

A book containing 84 personal accounts, from 69 contributors, related to the Northern Ireland conflict.
Book details:
An Crann. (2000). Bear in Mind: Stories of the Troubles. Belfast: Lagan Press / An Crann The Tree.
ISBN 1 873687 13-3

An Crann, Bear in Mind

The Worst Day of My Life, by Isabel

Blood and Milk Bottles, by Joanna

I knew something had happened to Brian, by Margaret

Every country in the world must have a police service ..., by John

A Door on the Troubles, by Enda

The difficulty was ..., by Billy

My Worst Nightmare, by Heather

When they made my daddy ..., by Pheme

My First Memories of The Troubles, by Julie-Ann

Before the Whole World Dies, by Aisling, aged 11

Fifteen Lines for Omagh, by Dennis

I believe the way forward ..., by Billy

The First Soldier, by Philip

A Soldier's Impression of the Creggan, by Mick

Kids at Play, by Mark

The Field Trip, by 'Mary'

The Orange Field, by Debbie

What type of people ..., by Dominic

A Personal Statement, by Susan

Us and Them, by Kathleen

I'd never been happy with the B-Specials ..., by Jim

I've been working in Belfast ..., by Lea

For Both of You, by Kathleen

The Peace People and Troubled Times, by Rhoda

Every time you went through the station door ..., by 'John'

Just Another Old House, by Richard

Laying Down the Law, by James

from Devices of Detachment, by Damian

The Lurgan Bomb, by Mairead

A Letter, by Tom

In Memory of Cyril Murray, by Tom

The whole policing thing ..., by Sean

The Other Side of the Mirror, by Stephen

There's a blindness ..., by Sandra

If we had went to Dunnes Stores ..., by Marion

You think you've all the time in the world ..., by Christine

The Callous Tide, by Joan

When they found his body ..., by Margaret

Anyone with even a basic knowledge ..., by James

A lack of imagination ..., by Lesley