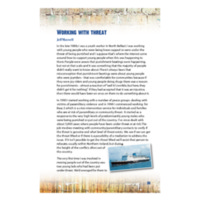 One of 16 personal accounts that were published in the book: 'Up Standing: Stories of courage from Northern Ireland'. (2013).

"Jeff describes work he has undertaken since the early 1990s in supporting people who have been put under ‘threat’ by paramilitary organisations. Jeff would liaise directly with the paramilitary group to see if the threat can be mediated or if they need assistance to leave the country. Jeff describes the challenges that faced young people who had to leave the country and the impact on him personally." (Up Standing: Educators Guide, p.24)

The Corrymeela Community in partnership with Facing History and Ourselves.. (2013). Working With Threat, by Jeff Maxwell (story text). The Corrymeela Press.
Accounts of the Conflict; Accessed: 4 October 2022 <http://accounts.ulster.ac.uk/repo24/items/show/2505>

Up Standing: Stories of courage from Northern Ireland (book details)