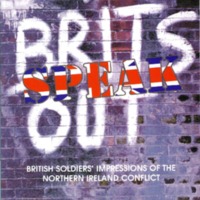 A book containing 14 accounts based on interviews with former British Army soldiers who served in Northern Ireland during the period of the conflict.